CRAIG ALAN ANSWERS QUESTIONS ABOUT HIS “POPULUS” SERIES OF PAINTINGS:

1. How did you get started as an artist?

I’ve always been creative, even at an early age, but it wasn’t until my second year of college that I started my formal training in two dimensional, 3D, and Theater Arts. The year was 1992, at the University of Mobile, Alabama

2. When/how did the “Populus” series come about?

I was in Orange Beach, Alabama at my mother’s condo watching people on the beach from the balcony. I started photographing them from the 6th story balcony and began to notice a pattern through the camera. In one shot, the group of people appeared to have formed an eye on the screen, this started my creative wheels turning. Year 2007. (Note: Earlier during my schooling, I had written a paper called “The Bridge Beyond”, in which I try to make relationships between all things great and small. Atoms to solar systems, draining of water to black hole rotation, people to cells, and on and on.)

Portraits (icons) always came easy to me, it was only natural that the two should be combined. It’s important for the viewer to connect with my work on many levels, people relate themselves to these Celebrity Icons. Throughout history they make a mark in print and also in our hearts. 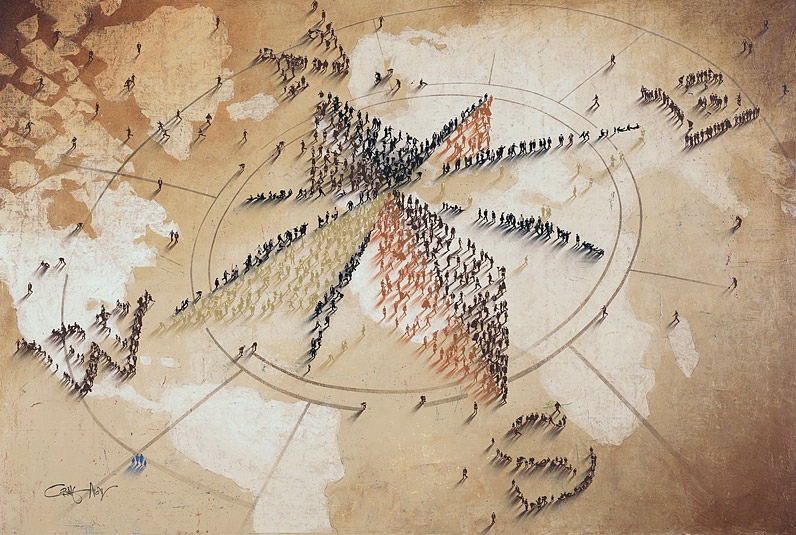 4. How do people react to your work?

When people see my work, they are typically amazed. They usually say “Wow! That’s cool!” Then they get up close, to see the individuals, they comment on something they think is cleaver, for example, the box head man or the guys carrying a sheet of glass. They comment on the actions of the individuals with enthusiasm. Finally they step back and are intrigued that another form, (Marilyn Monroe, for example) could be created of these small individuals. It’s rewarding for me as an artist to watch people’s reaction to my work and to see them get such enjoyment out of it.

5. Is Painting your life?

I am a painter, this is what I was meant to be and I will never stop painting. So yes, it is my life.

6. How do you go about visualizing the pictures before you paint?

Observation is the best way I can convey how I visualize a painting. I keep journals that contain most of my ideas. This is a necessity due to the fact that my head is always reeling with ideas. I try to simulate human behavior through each image, this simulation stems from my observations. For me, the people and how they interact with each other and what they come together to make is the most important aspect of each painting. We are all symbiotic beings, all part of something greater and lesser than ourselves.

7. Have you got any upcoming or current projects?

Currently, I am working on paintings related to children’s novels and fairytale.

8. How long can each painting take?

Depending on the size, it can take about 3 weeks working time.

Born in 1971 in San Bernardino, California and raised in the Atlanta area, Craig first recognized his creative drive via crayons on his parents’ walls, like many inspired young artists, and by the age of 7 his capacity for detailed visual interpretation became undeniable. After excelling in an introductory drawing class in school, Craig continued to develop technically and conceptually through his own diligent studies while always planning to pursue a formal art education.

He accepted a soccer scholarship at the University of Mobile, AL along with 3 summer art classes and in the first, Pottery, Craig’s light bulb switched on in a rejuvenating glow! Learning became enjoyable from that point forward in his life and he was immediately thrust into the scholastic limelight. To help sustain his education he found financial support and enjoyment in driving to New Orleans on his weekends and creating portraits for passersby on the streets, with original rates that baffle today, at $15 for charcoal and $30 for watercolor! This endeavor helped him perfect his flair for replicating the human figure and afforded the budding artist a sense of economic autonomy. With a focus on studio art, his minor concentration in theater further diversified Craig’s craft and armed him with additional techniques in makeup and set design. This blending of disparate influences and media is visually apparent in all of Craig’s works, which demonstrate a broad knowledge and appreciation of the human form as well as the colorful world these beings occupy. Craig earned an area award for academic excellence and the university’s most prestigious exhibition, “Art with a Southern Drawl,” featured 1 of Craig’s pieces, out of 42 chosen from a field of more than 1,600 submissions.

He learned how to frame art while working in a small frame shop part time while he was a student and a few months later his coworker pointed him in the direction of Deljou in Atlanta. He was hired and remained in framing for 4 years after pioneering the department’s establishment before he realigned with his passion of art and joined the league of other artists in the art studio.

In his prolific career is a culmination of textbook artistic knowledge and keen aesthetic sense that has gone from a “slow and studied” application to “fast and free of precise thought”. Craig’s collections run the gamut from abstract expressionism to haunting, graphic realism, each one a reflection of its creator’s unique vision. He is most well-known for his Populus series, which drew inspiration from a balcony overlooking Orange Beach, Alabama where patrons enjoying a wedding party seemed to form the shape of an eye where they stood. Craig explains, “Inspiration begins with a ‘What if…’ as I consider alternate imagery, surfaces, effects, results, etc. It comes from the past in conjunction with now. Like a bolt of lightning.” Since the epiphany, his Populus series is now home to dozens of celebrities and icons of all ages including: Marilyn Monroe, Elvis Presley, Frank Sinatra, Freddie Mercury, James Bond, Salvador Dali, Pablo Picasso, Van Gough, Gandhi, James Dean, Lady Justice, John Lennon, Queen Elizabeth, Darth Vader, Michael Jackson, Audrey Hepburn, and many more!

Craig has become publicly recognized as an innovator in the visual arts industry and has achieved many spectacular feats through the years:

Craig is humbled as he sees his work inspiring creativity among enthusiasts in various forms, including commercials and advertisements. He asserts, “Art needs to be responsible to its purpose; to inspire and enhance.” To beginning artists he says encouragingly, “be yourself and do what YOU want to do, not what someone else advises or suggests,” and in the words of his Pepaw, “Don’t ever quit!”