Iman Maleki’s fascination with painting began as a child. He started taking lessons in painting at the age of fifteen. His first and only teacher in painting was the celebrated Iranian painter Mortezā Kātouziān. His career as a professional painter began during this period. Maleki studied, from 1995, at the Fine Arts Faculty of University of Tehran, from where he graduated in Graphic Design in 1999. Since 1998 he has presented several exhibitions of his paintings. In 2000 Maleki established Ārā Painting Studio (آتلیه نقاشی آرا) where he also teaches painting.

During the Second International Art Renewal Center Salon (TM) Competition in 2005, Maleki was awarded The William Bouguereau Award – Emotion Theme and the Figure for his painting Omens of Hafez (Fāl-e Hāfez) and a Chairman’s Choice Award for his other painting A Girl by the Window (Dokhtari Dar Kenār-e Panjareh). 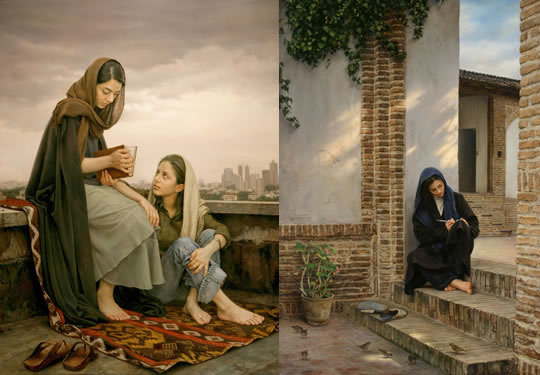