NeMo is a street artist known in the governorate of Mansoura , Egypt .

Nemo chose to convey important social and political messages by drawing the faces of innocent children on the walls of hospitals, bridges, and schools. Nemo launched four campaigns aiming to convey the voice of the poor and homeless children. The first tackled the issue of homeless children in the Egyptian streets and aimed mainly to attract people’s attention to the children who have no shelter to protect them from the winter cold. The second mainly addressed the problems of child labour.

The third campaign “Don’t” paid more attention to boosting a number of social and cultural norms and values such as reminding people not to forget the rights of the martyrs, not to be a hypocrite, not to accept injustice, and not to be fully dependent on others.
Through his fourth campaign “Be happy”, he tried to spread the joy and happiness among people with several drawings of people with beautiful smiles. 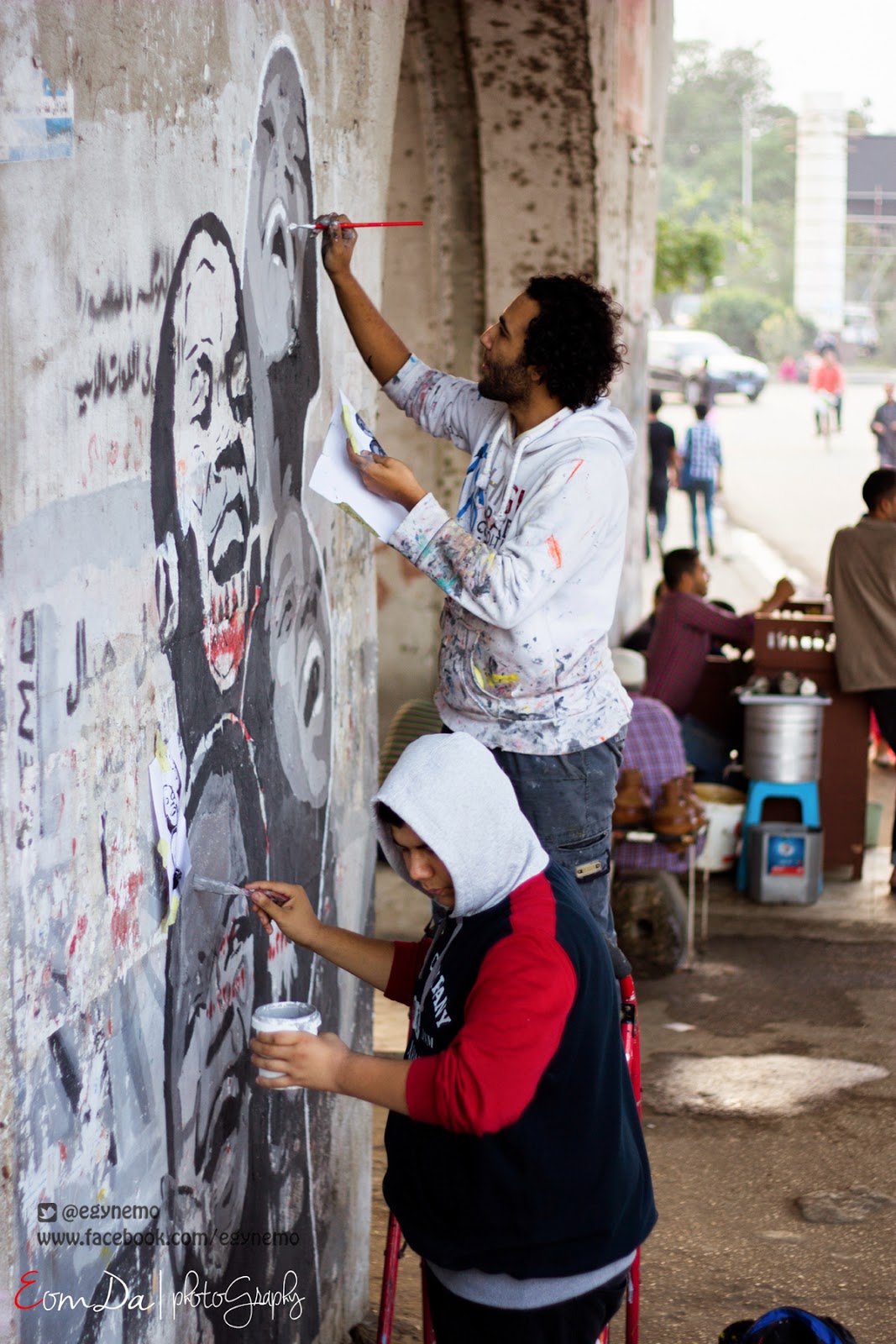 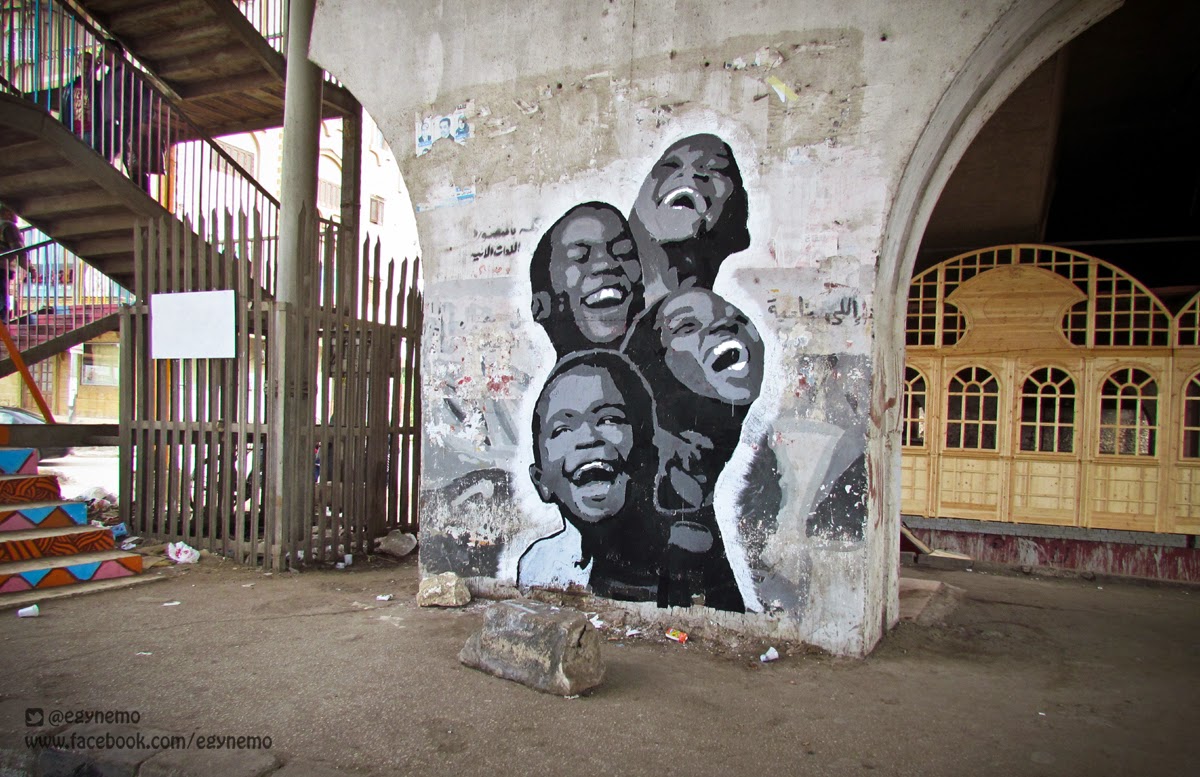 “Although I am a dentist, I was fascinated by graffiti art a long time ago,” Nemo said. “I started growing interest for graffiti since 2008 by watching the artistic works of other artists. I decided to exploit my talent and use it as an effective tool to express my thoughts and convey important messages to dozens of people.”

To learn graffiti, he started to download photos and videos about it from the internet and try to imitate them. With a group of friends, Nemo took to the streets and started drawing on the walls in 2009. He then posted some videos of their work on the internet in which managed to appeal to a large number of viewers on social media.

In his point of view, graffiti is considered an important art form that can easily reach hundreds of people in their residential areas, unlike other art which devise other media sources where audiences need to exert some effort to get the message. 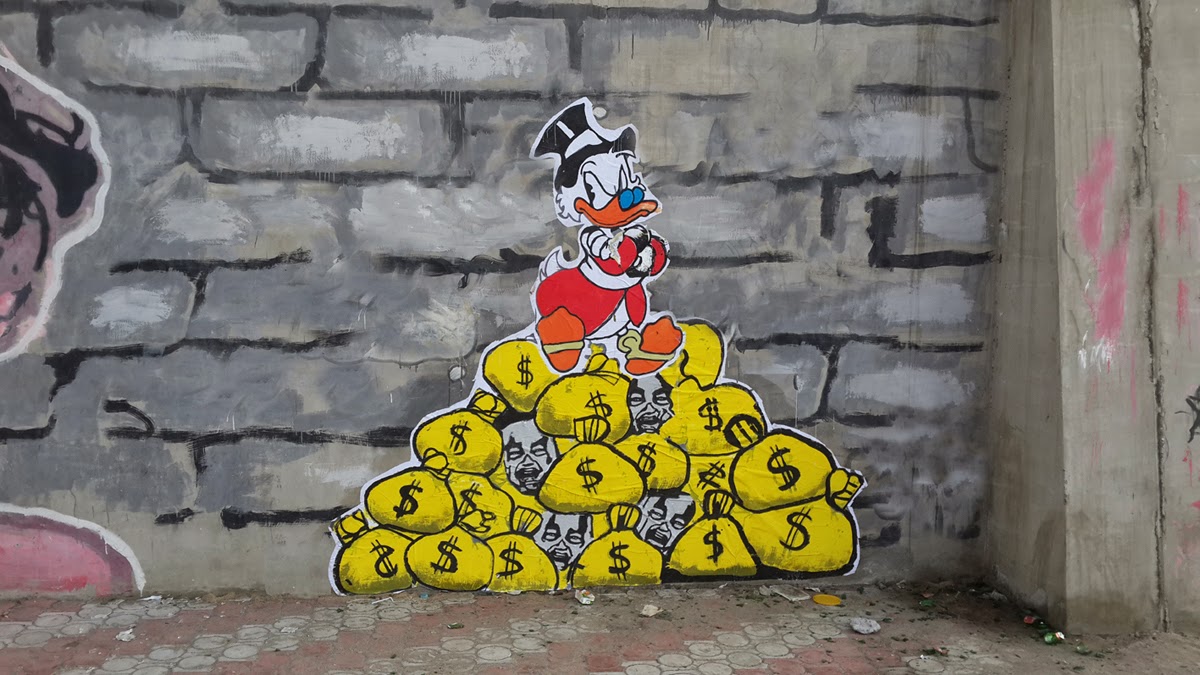 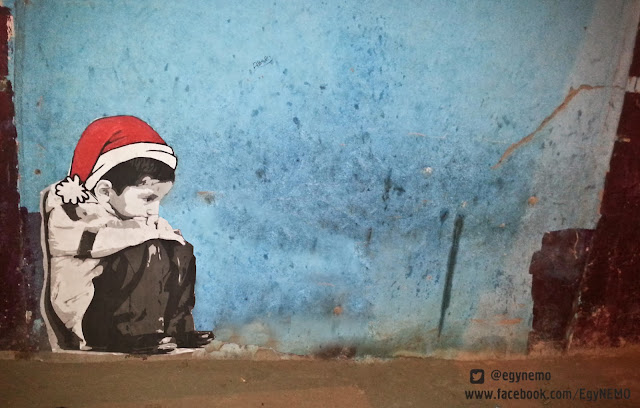 Nemo has a unique vision regarding art, that it is a message before it is entertainment or amusement to people and that graffiti in particular is an expressive art that must shock people with the ugly truth that might influence their behaviours as well as their political and social beliefs.

Although he did not make any profit from of his drawings, Nemo still feels satisfied and motivated to buy colours and brushes and get out of his house, sometimes  in the middle of the night, to draw something and convey a certain message.

“I love drawing children because the innocence in their faces helps me communicate with people, express certain issues in an effective way, and send them my messages easily. I also love drawing elderly people because the wrinkles on their faces give me a chance to present my unique talent and skills,” he said.

He explains, however, that he used to encounter obstacles when he used to draw in the streets. “Mansoura is totally different from other governorates such as Cairo and Alexandria since graffiti is still a new kind of art for people living there because of the limited number of street artists there, he said. “In the beginning, I used to face some difficulties while I was painting and some people started erasing my drawings to disappoint me. However, this urged me to insist more on convincing people with the importance of this art. Now, a lot of people have shown their support for the whole idea and have begun to see it from a completely different perspective.” 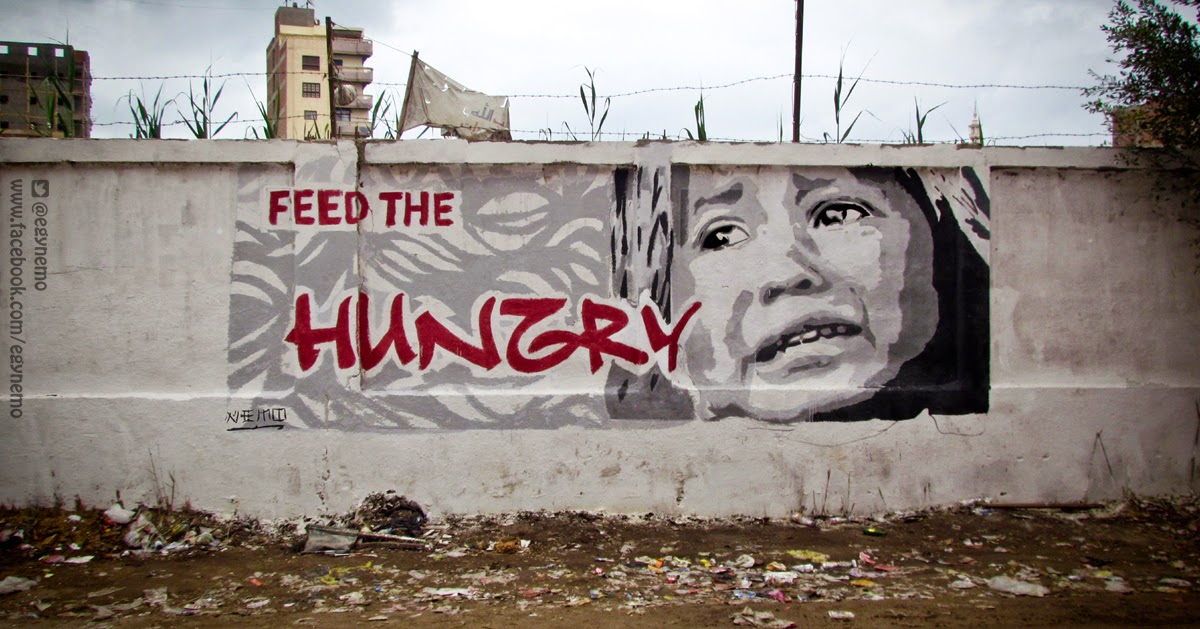 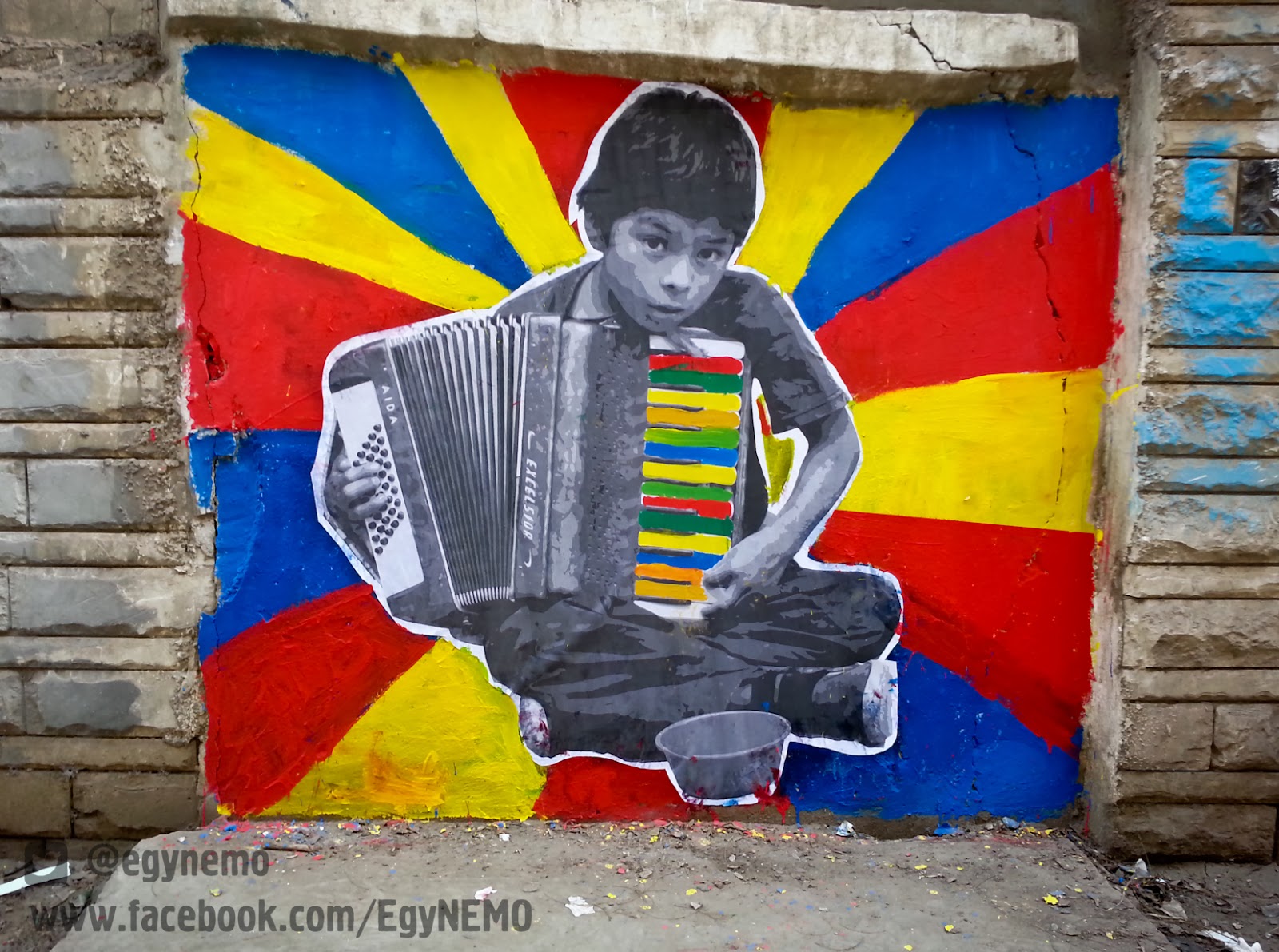 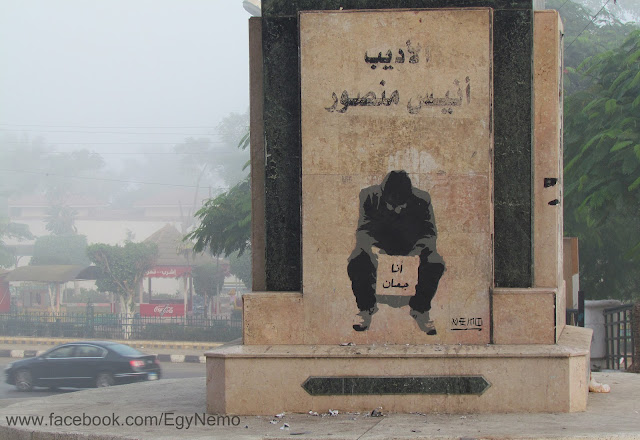 Although most graffiti is always drawn on walls, Nemo insisted that graffiti can be drawn on any still or even moving items including trains and buses. The most important factor behind choosing certain places to draw upon is always if the area is relevant and if a large number of people will be able to see it.

Because graffiti is an underground art form that must be free from any restrictions or intrusion from any institution, it must be self-funded by the artist himself to guarantee his freedom of expression. From Nemo’s point of view, not all artists are able to create graffiti because it is not just a painting that will be displayed in an exhibition; it is a drawing that will be seen by hundreds of people over years. 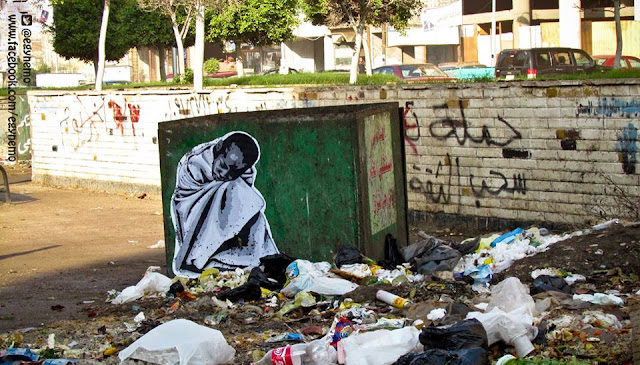 “From time to time, I like to add some items to my old drawings. For example:  two years ago, I drew a homeless child but last year, because the political circumstances did not change, I just added a Santa Claus hat to his drawing, he said. “This year, I tried to give every homeless child some hope so I wanted the child in the painting to draw his dreams for the New Year on a board. Because his dreams are simple, he only drew a Christmas tree and Santa Claus toy and magical stick. Although the homeless child cannot even achieve such simple dreams in reality, I cannot deprive him from dreaming.”

Although many of his drawings have been erased, he insists on painting and giving a voice to the poor to express their suffering after the two revolutions in Egypt. “I will keep drawing and shedding light on the disasters in Egypt for people who did not feel any difference between the sequence of political regimes. Their main goal in their everyday lives is still finding bread to feed their families. I do not target officials with my artistic work, I am from the street and I am targeting the street to whom everyday people belong,’’ he said. 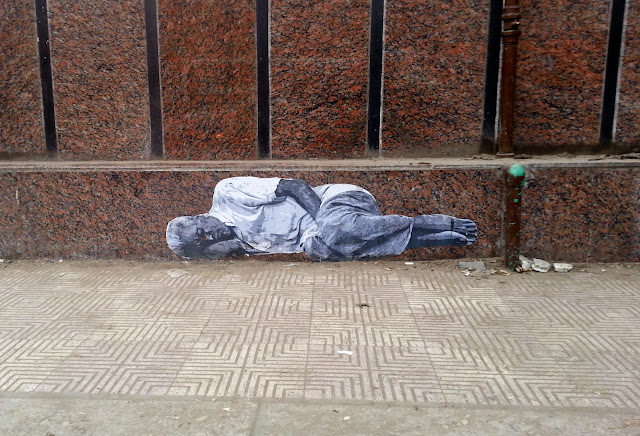 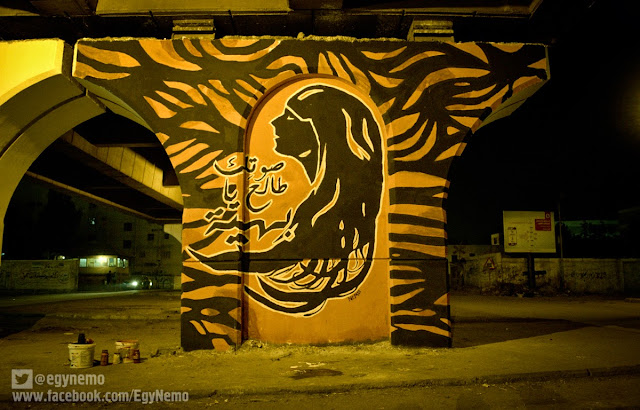 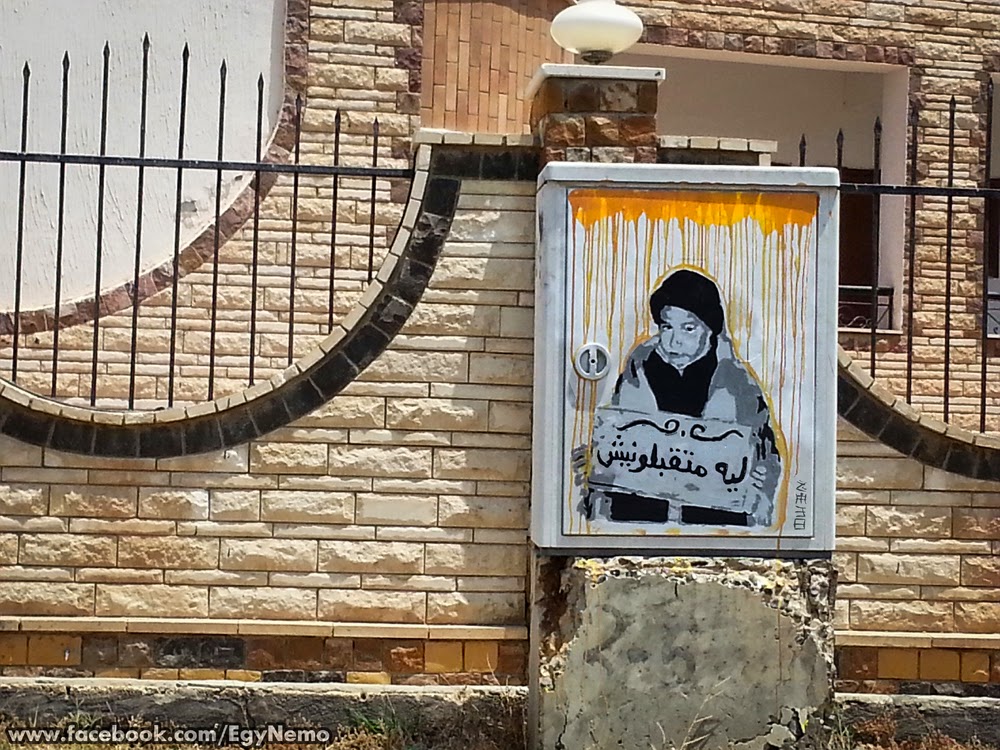 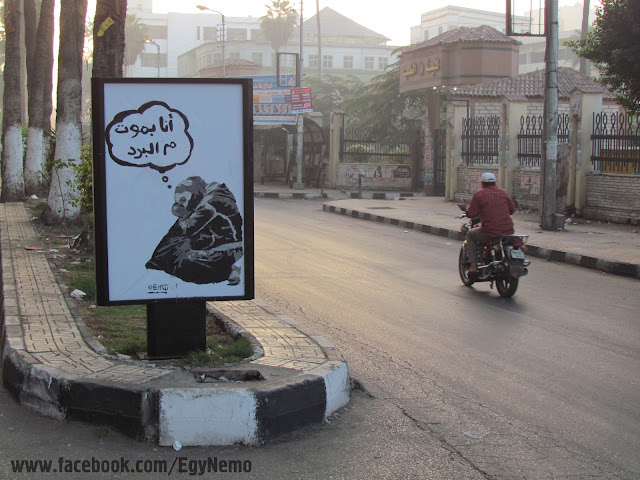 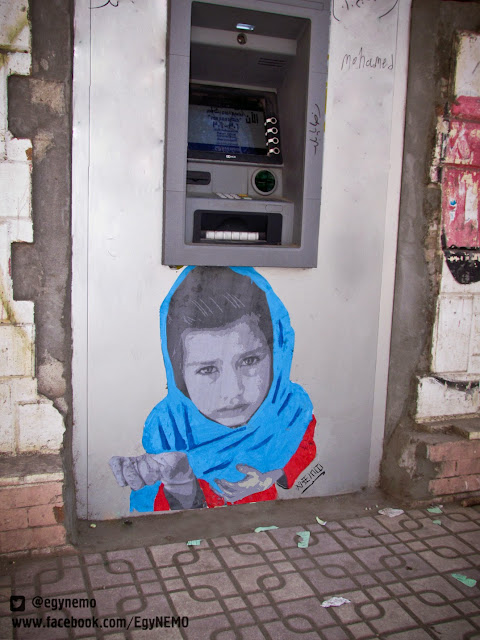 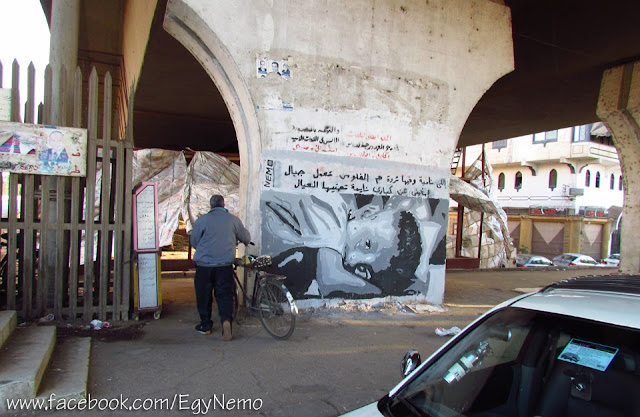 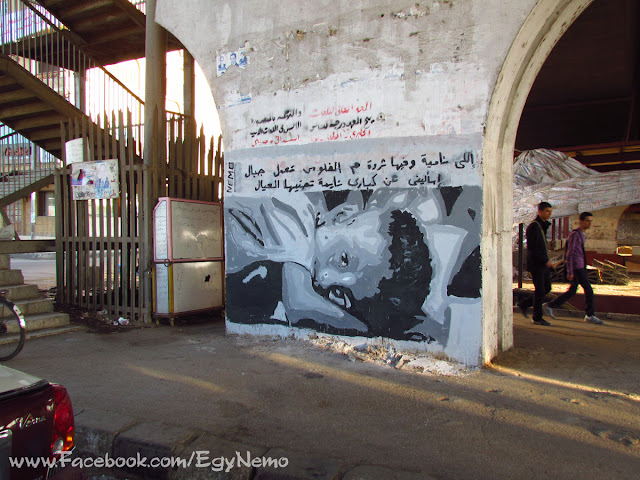